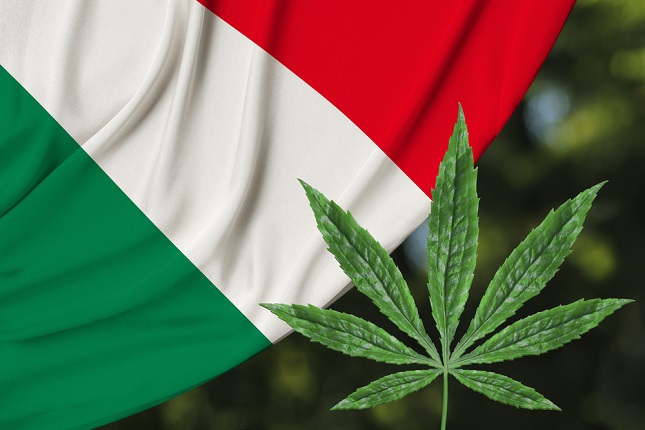 U.S., September 23, 2019 (CANNABISNOW)- The provincial city of Cosenza — in the region of Calabria, the southern tip of Italy’s boot — is hardly one of the country’s metropolitan centers. But, amidst the town’s narrow streets, several low-THC cannabis shops are open for business.

One of the most prominent is Cicileu, just a block off the Corso Mazzini, Cosenza’s main drag and pedestrian mall. It opened in April 2018, taking its name from the slang word for getting high in a regional dialect (celebrated in songs by local reggae and rap bands) — even though the stuff on sale there doesn’t actually get you high.

But beautiful and fragrant buds are in open display, each in a sealed package marked with the percentage of THC and CBD, all within legal limits that restrict the amount of THC to 0.6%. There is also a perfunctory note on the display cases saying that samples are for “collection” and “ornamental” use. There are also bottles of CBD-infused olive oil, wines and liqueurs, and packages of hemp pasta.

Cicileu co-owner Antonio Agovino says wryly, “We can market it thanks to a legislative hole. There is no law that says you can sell it, but none that says that you can’t.”

But this loophole has led to some turbulent times. In the spring, when Italy’s then-Deputy Prime Minister and de facto leader Matteo Salvini went on an anti-cannabis tirade, Agovino shut the shop to be safe. When Salvini was ousted this September, Agovino reopened the shop. He’s now among the country’s hopeful that a more permissive cannabis climate could be around the corner.

Since June of 2018, Matteo Salvini served as Italy’s far-right de facto leader. When it came to cannabis, Salvini was seen as the figure standing in the way of any progress toward legalization in the country. Now, following a government shake-up in late August, he is gone — and legalization advocates have been swift to react.

Enza Bruno Bossio, a lawmaker with the center-left Democratic Party, one of the two partners of the new coalition government, said last week that the way is now cleared to press the legalization question, according to Italian website Droghe.

Hailing the end of what she called “salviniano obscurantism,” she said there may be sufficient “numbers in parliament” for a cannabis legalization law. “We can now open a discussion in the light of the new red and yellow majority,” she said.

“Red” is a reference to her own party, while “yellow” refers to the fuzzy populists of the Five Star Movement, Salvini’s former coalition partners — who remain the wild card on the issue. Five Star spoke initially spoke in favor of legalization, then flipped when it joined Salvini in power. It remains to be seen if the party will return to its libertarian roots, at least on this issue.

Futile Efforts at Clampdown Under Salvini

Italy’s right-wing governments have sought to tighten up a moderately tolerant cannabis policy since 1993, when Italian voters approved a referendum decriminalizing personal possession of all drugs. But cultivation and sale have remained criminal charges.

Italy’s Constitutional Court in 2014 struck down a 2006 drug law that jacked up sentences for selling, cultivating or trafficking cannabis from 2-4 years to 6-20.

But Salvini revived the clampdown effort upon taking power last June. This May, he blustered: “From today, I’ll go to war on cannabis street by street, shop by shop, neighborhood by neighborhood, city by city.”

This was actually a reference to low-THC varieties, which are sold openly in shops across Italy — and don’t get you high at all. Some smoke them for the CBD, others merely for the cachet of the experience.

The European Union actually has a 0.2% THC limit for legal hemp, lower than the 0.3% limit in the United States. But for internal use within Italy, Law 242 of 2016 establishes a 0.6% limit — still not enough for an intoxicating effect, but providing more flexibility in the available strains.

Days after Salvini’s May proclamation, Italy’s Supreme Court of Cassation, the highest judicial body in criminal cases, ruled that selling cannabis or its derivatives is illegal despite Law 242.

This was hailed as victory by Salvini. But he either didn’t read the fine print, or was hoping that others wouldn’t. The text of the ruling contained a clear exception for “agricultural” varieties, and “products that in practice have no drugging effect.”

Contrary to the media buzz, the ruling actually didn’t change a thing — and Italy’s low-THC cannabis shops remain open. Some closed doors in response to Salvini’s threats. But with his fall, they are now starting to re-open.

Agovino, the owner of Cicileu, has now re-opened his store, at the same location in Cosenza. He points with pride to a package marked “The Grandfather’s Weed” — in fashionable English. The package also sports a portrait of a rustic-looking old farmer with an impish expression and an outsized mustache. This is actually Agovino’s real grandfather, who grows the 0.2% THC bud on his mountaintop farm.

Agovino says his nonno has been growing cannabis for the past four years on the lands passed down in his family for generations, in the mountains west of Cosenza.

“Before that he was growing tomatoes, fruits, greens,” he says, “but he smoked cannabis in Germany in his 20s, while working in a factory there.”

The store sells 20 varieties, all grown in Italy — five from Calabria, several from Umbria, in central Italy. High-CBD strains are now being cultivated throughout Italy, including in greenhouses in the north, where the growing season is shorter.

The seed must come from within the EU, and only some 50 strains are approved.

“It can’t even come from Switzerland,” Agovino says. “And you can’t cross genetics.”

But he says that low-THC varieties from Hungary produce higher THC levels in the better climate conditions of Calabria.

Even without much THC, in fact, Agovino says, “People buy it to relax, for insomnia, to relieve anxiety. Many adults come here to not have to buy from the underworld.”

Italy has had a medical marijuana program since 2014, but it is very tightly controlled. The cannabis is grown by the military on a base near Florence, and registered users can only purchase one gram a month at a pharmacy. “So people have to go the street and buy illegal, because that’s not enough,” Agovino says.

Calabria’s notorious crime machine, the ‘Ndrangheta, used to grow lots of cannabis, but it largely switched to moving cocaine in the 1980s. Compacted illicit-market pot is now mostly coming in from Albania, across the Adriatic Sea, and Agovino says it is often adulterated with methadone.

But legal production of low-THC strains is taking root fast. “There’s been a huge explosion of cultivation in Calabria this year,” Agovino says.

And he’s proud to be a part of the new economy. A former pipeline worker for Italy’s ENI oil company, Agovino says he is much happier now. “This is my dream since I was a teenager.”